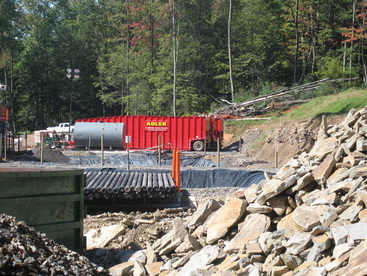 well pad in the forest


Current and future impacts of gas production development on State Forests and Parks are and
will continue to be significant.


These impacts include but are not limited to the following:
Land Conversion from Forest to Non-Forest:
Estimates vary as to the acres of forest land that will be cleared in the next 10 to 20 years, and what will actually take place may depend on the market for natural gas both abroad and in the United States.  Gas development, therefore, will likely see the conversion of 30,000 – 90,000 acres of forest cover, which could threaten forest species in an additional 91,000 – 220,000 acres.  New well pad estimates of 1,100 to 4,000 could result in 8,000 to 40,000 new wells.  Forest impacts will be concentrated in the northcentral and southwest parts of the Commonwealth where many of the State’s largest and most intact forest communities could be fragmented into smaller patches.

Alteration of Forest and Aquatic Ecosystems:

Forest Stewardship Council Certification:
Cumulative harm from the fragmentation and stress from invasive species and disease threatens the certification of Pennsylvania’s State Forest System as compliant with the gold standard for environmentally and socially responsible forestry established by the international Forest Stewardship Council (FSC). This certification is vital to the economic viability of the forest products industry in Pennsylvania.

Additional Negative Impacts including Noise, Dust and Stream Sedimentation, and Air Pollutants:
Increased noise from the construction and operation of gas wells, from compressor stations that operate 24 hours a day, and from truck traffic on the roads will affect the ecology and public uses of leased Commonwealth lands.  Conversion of permeable to impermeable surface, and increased and expanded gravel roads and traffic on roads on leased Public Trust lands, which are necessary to support the production of gas on these lands, creates runoff and dust which have caused and will continue to cause increased volumes of water and sediments into our natural streams.  Compressor stations required to compress the gas for transport emit a significant quantity of pollutants, including methane, into the air.  The industry necessarily uses gas-powered engines in the operations of gas production, which also emit contaminants into the air. These contaminants will cumulatively affect the ecology and public enjoyment of the leased lands.

Copyright 2013 by PEDF. All rights reserved.